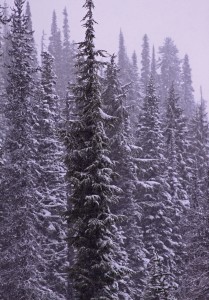 I was surprised to find myself in Whiteout conditions while snow shoeing along the White River, in the Mt. Hood National forest. I had been monitoring the forecast for the past few days and thought that I would take a chance, even though the forecast was calling for a mixture of rain and snow. I was fortunate to find that it started snowing just before the Tom, Dick and Harry parking area, along the 26. It continued to snow but got much heavier as I continued past Government Camp. Good thing that I kept driving since the snow really started to get heavy as I took the Hwy 35 exit. The snow at the White River snow park was more like graupel but at least it wasn’t raining. My first mistake was that I never brought my ski goggles with me. That ended up being a huge mistake because it snowed the entire day and it only got windier and heavier as I increased in elevation. I found myself in mostly whiteout conditions as I crossed over the white river and headed towards the summit. I never got anywhere near the summit but I was intrigued by the complete whiteout conditions and I was also experiencing snow blindness. This is where my ski goggles would have come in handy since the wind was blowing the snow in my eyes and I ended up squinting for part of my journey. I could see for a few hundred feet but I couldn’t make out any of the snow directly in front of me. I literally didn’t know if I was about to step off a 100 foot cliff or a 1 foot step. I ended up looking for small trees that provided me with more depth of my surroundings and ended up having a pretty fun time exploring this phenomenon. I was concerned that our winter was over early again but this current winter weather if providing a pretty good second chance to get back some of our snow pack that we lost during our previous warm up.