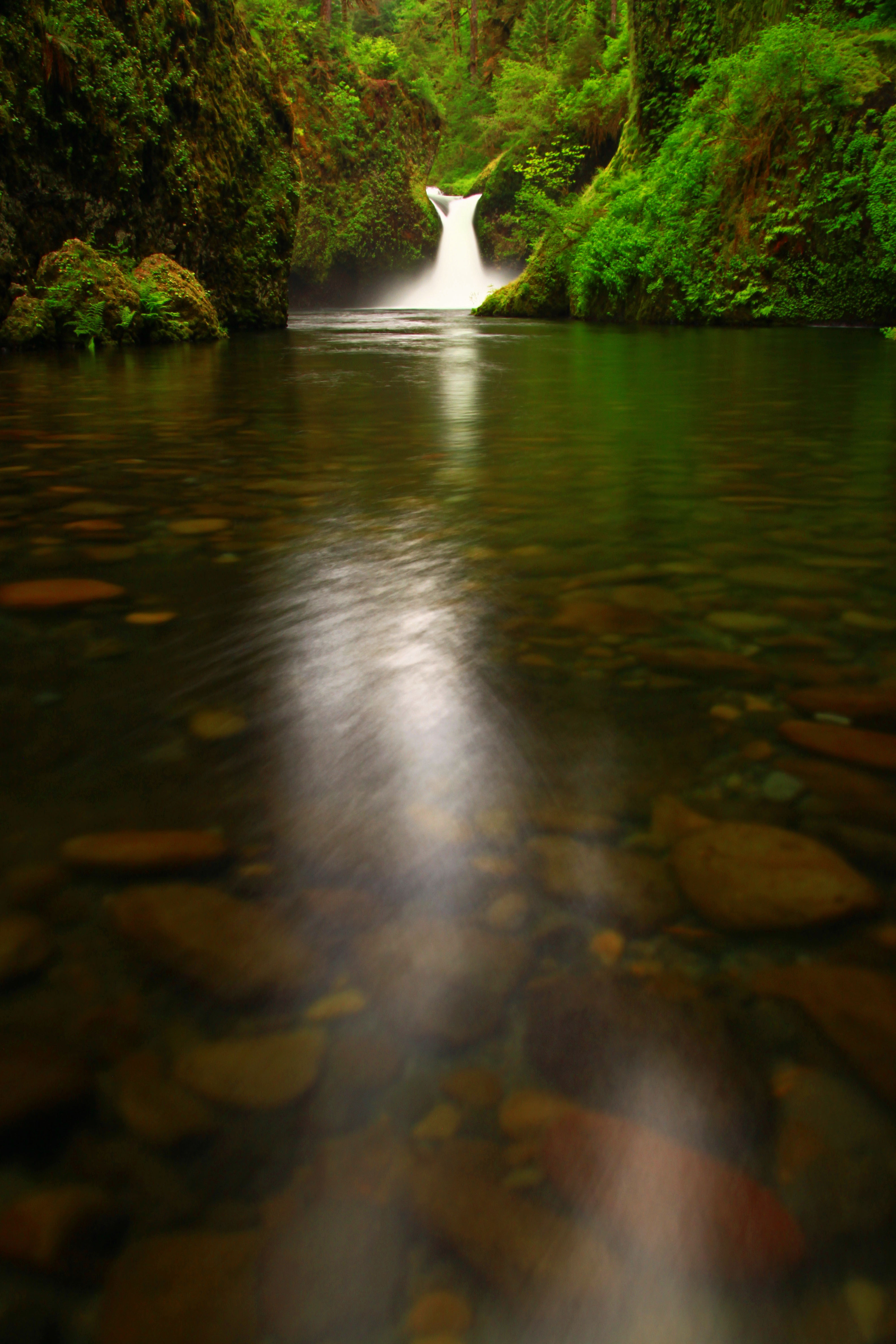 Unless you plan on wading out in a foot of frigid water to get this type of shot, I wouldn’t plan on making the trek until the water level starts to drop. The water level is so high that the rocky beach is almost completely underwater. I have never seen the water level in the gorge this high since I started hiking the gorge over 20 years ago. As you can see from this photo, Punchbowl Falls is beyond swelled. In order for me to get this shot I had to take off my socks and shoes and wade out in about a foot of water before I could get a clear shot. The water is moving pretty fast so you need to steady your tripod as firmly as possible and hope that it doesn’t move. In case I did lose my footing and found myself swimming in the frigid creek I made sure to leave my photography bag, with all of my other lenses, at the safety of the creeks edge. The creek was so cold that after about 30 minutes I completely lost feeling in both of my legs from the knees down. The pebbles and rocks that you are forced to stand on are pretty jagged and hard but once my feet became numb I lost all feeling and was forced to rely on my tripod to steady myself as I scrambled back to the edge. Next time I will bring my Teva’s so I don’t have this problem again. Though the vegetation is starting to spring there are still several plants that still haven’t bloomed as well as several of the old growth trees that have only just begun to show their buds. This created a challenge since I wanted to take advantage of the swelling creeks and waterfalls but not include any of the shots with the bare vegetation. The harsh winter and cool and rainy spring has really made it tough on the gorge this year. The wildflowers are even somewhat confused. Several of the flowers are growing along the high cliffs but most of the wildflowers that grow along the creeks are barely out. I chose this shot in order to show just how much water was thundering over the falls as well as ensure there were no bare branches. I was using my Canon T1i along with my Sigma 17-70mm lens. I made sure to use my tripod, bubble level and remote switch in order to avoid any camera shake. This was especially difficult since the tripod was in the middle of the fast moving creek. I attached my ND8, warming filter and CIR-PL so I could have the camera in Shutter Priority mode. The focal length was at 21mm and I had the shutter open for 5 seconds. The aperture was at F-13 and I set the ISO to 100 and the white balance at -0.7. I spent about 45 minutes in the creek so I had plenty of time to adjust the focal length and the shutter speed and white balance but I was forced to basically just adjust and shoot as quickly as possible. The morning and afternoon was overcast so the sky was perfectly covered and it never even tried to rain. The trees should start blooming within the next week so I hope that my next trip here will offer more color but still plenty of water.