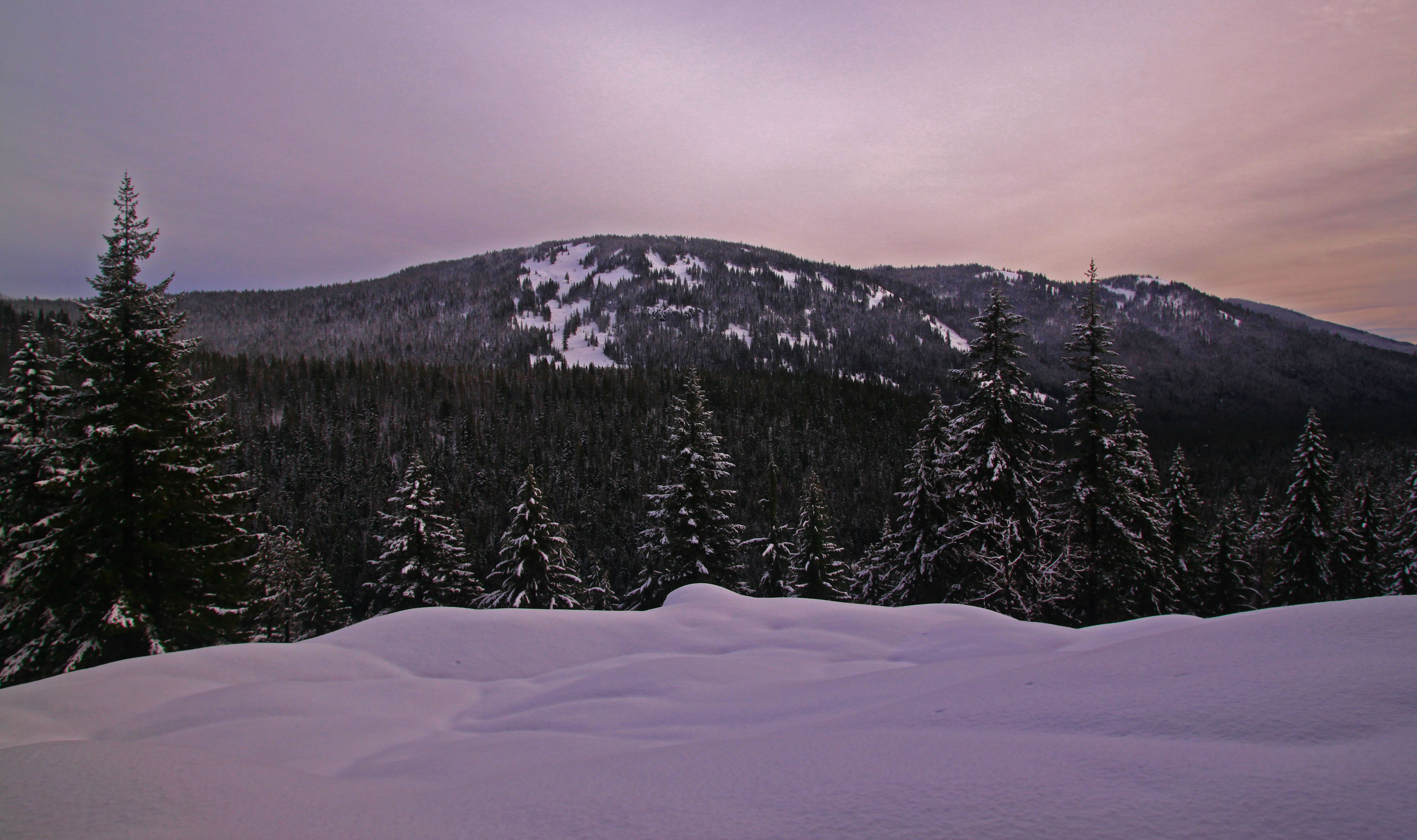 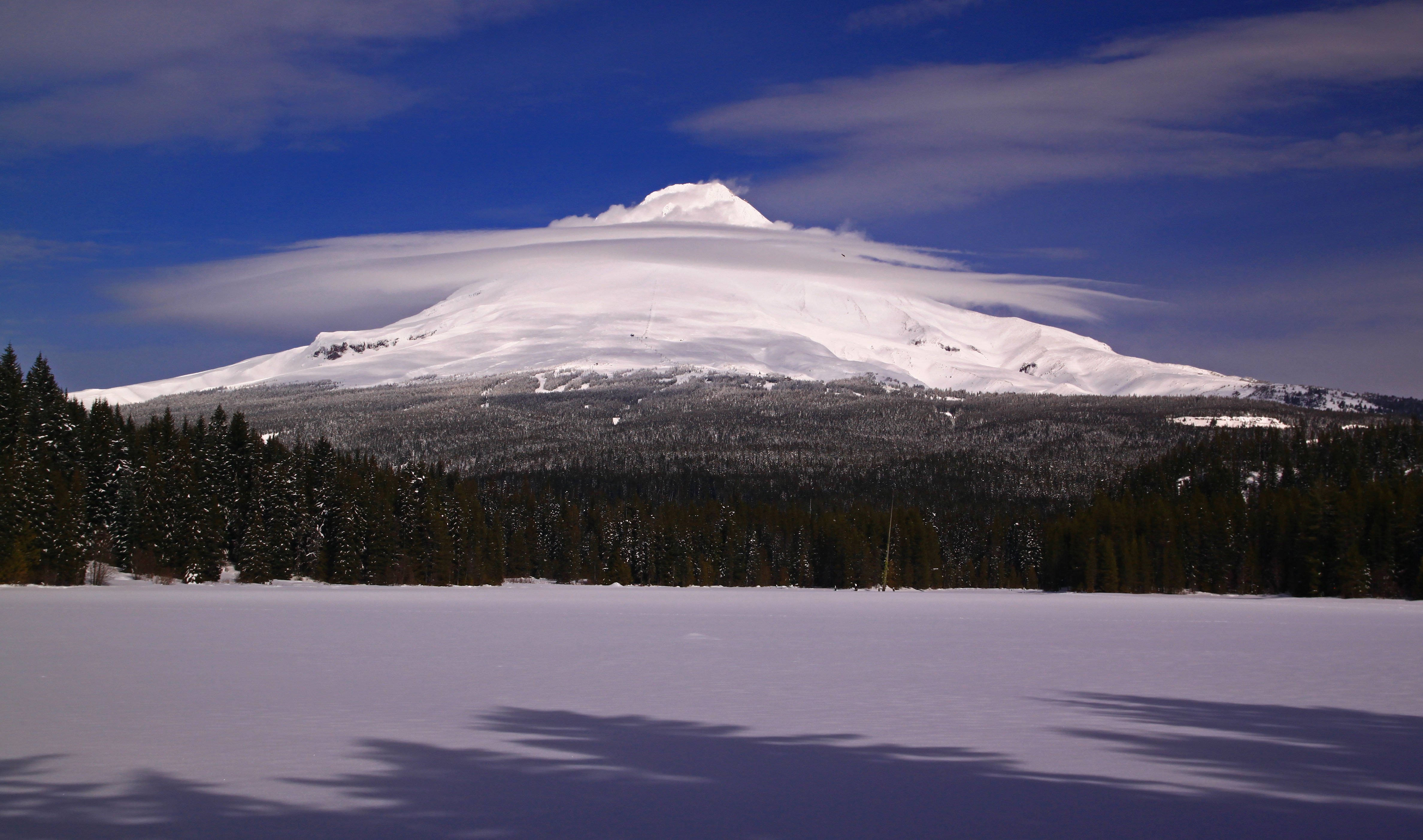 I finally got the chance to schedule a snow shoe trip in the Mt. Hood wilderness. However, last Tuesday the rain was coming down in sheets, just east of Sandy and the rain was even worse around Welches. I was pretty sure that Government Camp was going to be a total bust with nothing but rain. I was pleasantly surprised that the rain had turned to snow just as I was passing by the Mirror lake parking area. Luckily, I was able to find myself immersed in snow flakes the size of quarters by the time I reached the Trillium Lake snow park. I knew that the snow was going to be wet and heavy but that surely beats rain. The entire trip to the lake was a complete whiteout. I wasn’t able to knock the snow off my camera bag fast enough. I was fortunate to bring my front loading camera bag, which really came in handy. The only way to get out of the snow, to take some tree shots, was to snow shoe in the trees and look for some shelter. However, the snow was pretty heavy and the snow was coming off the trees like water balloons. As far as I’m concerned, snow shoeing during a snow storm is the best time to be out in nature but it’s not easy for taking pictures. You couldn’t even see Mt. Hood once I got to the lake. I wasn’t surprised but I was hoping for a miracle, where the clouds would eventually clear out of the area and I find myself surrounded by snow covered trees and Mt. Hood looming in the background. However, that wasn’t the case but I made the best of it by photographing my dog running around and trying to photograph the snow covered trees in the distance. The photo that I posted wasn’t from this day but from last Sunday, when I came back on a much sunnier and dryer day. The crowds were horrendous but that was expected. It didn’t help that I broke my right snow shoe but at least it was only a few yards from the parking lot. I ended up hiking instead and luckily there were snow tracks as deep as 2 feet and the main trail was packed harder than a rock so I didn’t have any trouble getting to the lake. However, it was a totally different story if I tried to walk in the deep snow. The drought is officially over in the Oregon Cascades and last week was proof of that. It also helps that they are expecting another week of heavy snow.

[/caption] Beautiful sunny day in the Mt. Hood Wilderness with views of Mt. Hood and a very stubborn cloud that refused to allow me to take a cloudless photo! This photo was taken at Trillium Lake last Saturday and as you can see it was a pretty nice and sunny day except for the dark grey cloud hanging around the mountain. To get this shot I attached my Canon 25-135mm telephoto lens and set the focal length at 95mm in order to get the best photo of the blue sky, mountain, cloud, forest and trees in the foreground. There were so many snow-shoers and x-country skiers on the frozen lake that I wasn’t able to take very many shots with the frozen lake in the foreground. I ended up zooming in on most of my photos and concentrated on the cloudy mountain and the snow covered trees. I know that weekends can get pretty busy anywhere near Mt. Hood but Trillium Lake was more like Disney Land during peak season.

[/caption] Trillium Lake normally freezes over during the winter months and allows snow-shoers, x-country skiers and the occasional ice fisherman to take advantage of the winter paradise! This photo was taken from the north side of the lake with Mt. Hood behind me. I took this shot at about 2:25pm and as you can see the sun was included in this photo in order to brighten the photo as much as possible without allowing too much glare to ruin the shot. In order to avoid this I made sure to attach my CIR-PL and set the ISO at 100 and reduced the white balance to -0.7. I was hoping to increase the brightness and reduce the saturation surrounding the trees but due to the snow, I was limited in my attempt to have each tree stand out more. I had the camera in Normal/Program mode so the aperture was at F-10 and the shutter speed at 1/400 second. I ended up increasing the brightness on my Adobe Photoshop to 25 since the color of the sky was over saturated and the trees were barely noticeable. I was using my Sigma 17-70mm lens and kept the focal length at 17mm in order to get the most panoramic photo as possible.

[/caption] Early spring offers a great view of Mt. Hood from the banks of snow covered Trillium Lake in the Mt. Hood National Forest. Trillium lake is located on the south side of Mt. Hood and the sun travels directly behind you when facing the mountain. Your best opportunity for getting great shots is either in early morning or early evening. However, winter and early spring doesn’t always give you a good window of opportunities due to the unpredictable nature of the weather. It’s about a 6 mile round trip snow shoe trek from the snow park and it will take you about an hour to get to the banks of the lake. This photo was taken at about 11:55am and the sun was just behind the trees directly behind me. The shadows in the foreground are from the huge trees directly behind me. I set the camera setting to normal/program mode and the aperture was at F-9.1 and the shutter speed at 1/250 second. I attached my CIR-PL, warming filter and UV filter to my Sigma 17-70mm lens. I set the focal length at 28mm and set the ISO at 100 and the white balance at 0 due to the brightness of the sky due to the albedo/reflection caused by the snow covering the lake. I was also using a tripod and bubble level to avoid and camera shake. The best time to visit Trillium lake is just after a huge snow storm and the entire forest is blanketed in snow.

[/caption] Who’s ready for the ski resorts in the Pacific Northwest to open already? After we received our first snow storm in late October we have been patiently waiting for the intense pounding of the fresh white stuff. However, we have been getting a mixed bag of rain and snow in the higher elevations. It’s only a matter of time before winter comes in full force but I’ve already completed my first snow-shoe journey and I’ve eagerly taken out my snow-board gear. I took this shot a few weeks ago while visiting Trillium lake. You can see Timberline lodge in the lower right side of the photo and you can see just how awesome Mt. Hood can look once it’s covered in snow. To get this shot I was standing on the far end of the lakes edge and made sure to use my tripod, bubble level and remote switch in order to avoid any shake. I was using my Canon Rebel T1I and my Canon 55-250 telephoto lens. The focal length was set at 131mm in order to keep the mountain in the foreground without showing any of the green vegetation showing in the lower elevations. I was using my UV, warming and my CIR-PL filter since I took the photo at 11:20 am and the sun was fairly bright even though the edges of the lake were shadowed by the trees. The F-stop was at F-8 and the shutter speed was 1/400 second. I set the ISO to 100 and the white balance to 0. I again had the camera set in the Program mode. The best thing about this photo is that there are only a few shadow’s showing along the mountain. This allows you to see all of the crevices and little peaks near the higher elevations. You can see where the Palmer lift ends as well as the vapor vent in the upper right side of the photo.