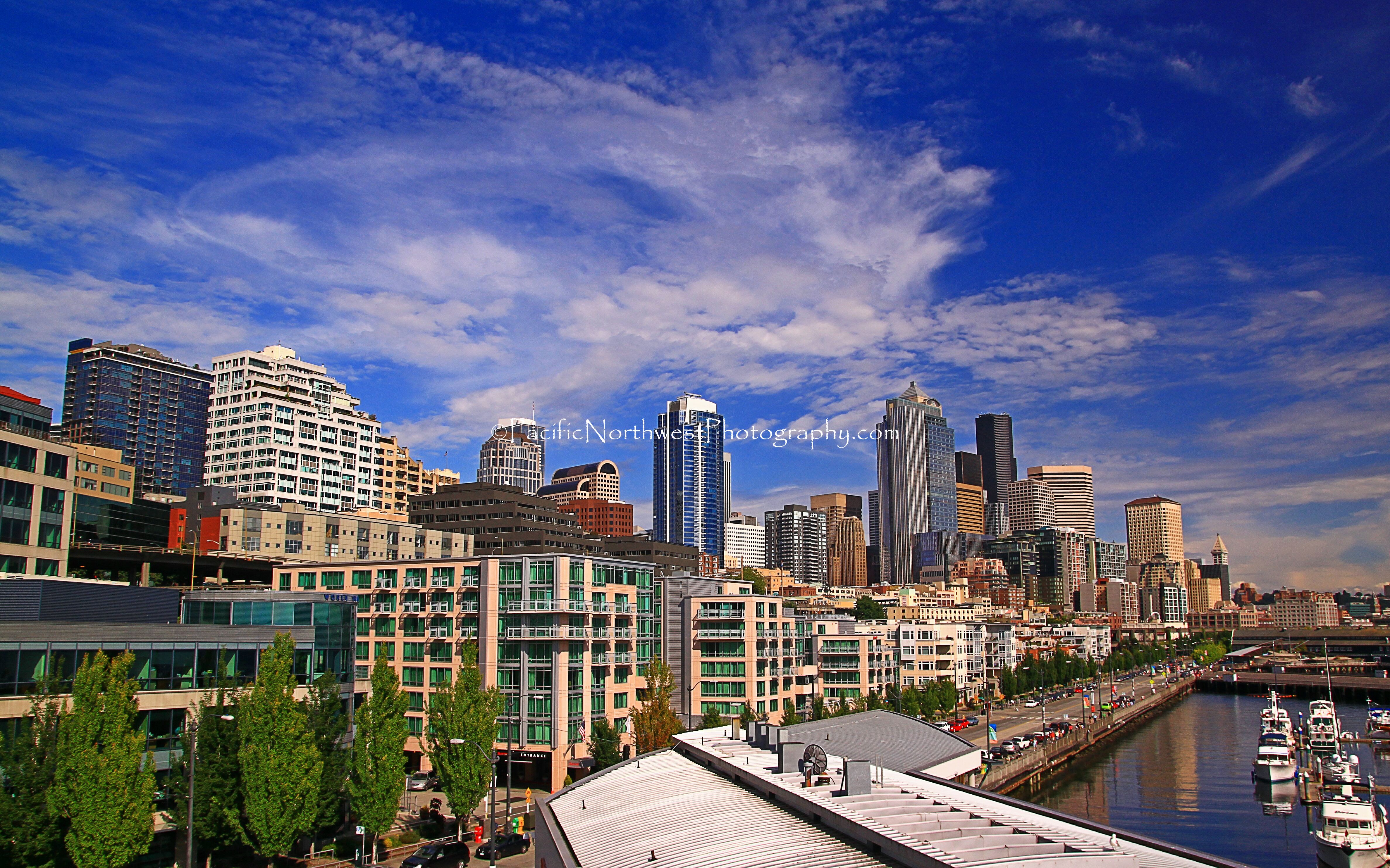 We are only a few short days away until the rains in the valley and the snow in the Cascades will subside and the warm weather will return to the Pacific Northwest. This means only one thing and that is that you should head out the the great city of Seattle, Washington and get your photos on! Don’t hold back and what I mean is that you should pack all of your gear and expect to use every piece of equipment that you own. They don’t call Seattle one of the most photogenic cities for nothing! You can literally expect to change out your wide angle and your telephoto zoom lens as you capture the landscape. One would also be advised to study the best locations and best times of the day to visit. This means that you will want to have a car and plan on driving all over the city as you try to capture the best shots as you try to get a handle on the best colors presented by the sun. This photo was taken from one of the many piers and I tried to capture as much of the buildings as I could without having any of the traffic from the road below. I normally just crop out what I don’t like and then just photoshop when needed. The clouds were really cool as they were swirling above and the color of the sky was perfect since there wasn’t too much glare. If you are visiting from out of town I would recommend staying at least two full days since you never know what the weather will be like and you will need at least two full days to feel like you had enough time to visit each of the photos spots once or more.

[/caption] Summer weather in Seattle, Washington offers some of the best sunny and warm weather in the Nation! If you’re looking for the best city to visit during the month of August, you may be surprised that Seattle, Washington offers some of the most amazing weather in the country. You will find the days long, sunny, warm and especially nice and breezy. Plan on bringing some comfortable walking shoes because you will find yourself spending each day walking along some of the best trails around as well as experiencing some of the best city walks in the country. If you plan on bringing a camera I would recommend bringing a wide angle lens as well as a semi telephoto lens. I would also pack your CIR-PL, warming filter and a ND filter. Sunsets are amazing and the city is so huge that you will need a wide angle lens in order to capture the entire city in a panoramic shot.

[/caption] You know that you picked a good day to visit Seattle, Washington when there isn’t a cloud in sight, the temperature is 81 degrees and the moon is directly over the city. I took this photo from the top level of Bell Street pier 66. It is by far the best place to get epic photos of the sky scrapers, adjoining piers, and of Elliot Bay and the Olympic mountains. I could pretty much set up my tripod and spend an entire 24 hours shooting from this pier. You can also get some great shots of Mt. Rainier with the massive cranes in the foreground. However, if you have a descent telephoto, you can zoom in and almost see the mountain climbers heading towards the summit.

[/caption] The Great Wheel is located in Seattle, Washington and is located on pier 57 and reaches a height of 175 feet.

[/caption] The perfect end to a perfect day in Seattle, Washington with the silhouettes of the Olympic mountains standing in the distance of Elliot Bay and a ferry boat. If anyone is wondering what the weather is mostly like during the summer months might want to study this photo since as you can see it’s picture perfect and absolutely not a single flaw on this day. I took this photo while standing along pier 54 and Elliot Bay.

[/caption] A picture perfect view of Seattle, Washington with all of the necessary subjects that make Seattle one of the most photogenic cities in the world….Mt. Rainier, Elliot Bay, Space Needle, towering sky scrapers and the industrial cranes that keep Seattle one of the top industrialized cities on the planet. This photo was obviously taken from Kerry Park and I made sure to set up during the later part of the afternoon in order to take advantage of the flawless blue skies. I made sure to use my tripod and bubble level and attach my CIR-PL and warming filter on my 17-77mm lens. I set the camera at normal and had the aperture set at F-5.7 and the shutter speed at 1/100 second. I set the ISO at 100 and increased the white balance to +0.3 in order to avoid too much glare from the sun but also wanted to be sure and avoid any under exposed photos due to the filters and setting that I was using.

[/caption] View of Mt. Rainier, stadiums and Seattle’s shipping port from Bell street pier 91. A great place to get some awesome photos of Seattle, Elliot Bay and Mt. Rainier is by hiking to the top of the fairly new Bell Street Pier cruise terminal. You also have a great view of the Olympic mountains and West Seattle but the best view is of the highrises in downtown Seattle. This is a photo looking directly south and there was a massive cloud system moving through Seattle. You can also see the low lying clouds at the base of Mt. Rainier. I made sure to attach my CIR-PL and warming filter due to the bright sun glare as well as from the glare of the water and buildings. I was using my tripod and remote switch and attached my Sigma 17-70mm lens and set the focal length at 70mm. The aperture was at F-5.7 and I set the ISO at 100 and the white balance at -0.3 to offset the glare. I wanted to increase the shutter speed, which was at 1/197 second. Even though I took this photo in July you can see how much snow was still on the mountain.

[/caption] Even complete darkness can’t bring down the skyline of Seattle, Washington! If you’ve ever wondered what a city skyline would look like, hours after the sun has set, this photo gives you an idea. The entire scene is filled with nothing but the bright lights being generated from the city itself. There is absolutely no light being generated by the sun. However, after so many hours, from the time of sunset, the night sky becomes so dark that you are pretty much unable to take any photos of a brightly lit night sky unless your OK with a very grainy and pixelated photo. I believe that this was my last shot before I decided to call it a night. I was able to set the shutter priority to 32 seconds and was even able to remove all of my filters. The aperture was set at F-5 and I set the white balance at +1. The sky was partially shrouded in clouds but as you can see the sky looks pretty awesome! I was even able to keep the ISO at 100 and luckily you don’t see any grain in the shot as well as no pixelation. This photo was taken from the banks of West Seattle with Elliot Bay in the foreground. Luckily, I was able to have the shutter open for over 30 seconds without having a ferry or boat blur the shot. This can be a very frustrating task but as the night gets later the ferry crossings get smaller and very few boats are out in the Bay.

[/caption] Beautiful view of Seattle with Mt. Rainier looming in the distance! The grand view of downtown Seattle from Kerry Park. Not many cities on the planet offer a view like this. One of the most spectacular mountains on the planet teaming up with one of the most photogenic cities on the planet offer views that demand a persons attention! This photo was taken during the month of July and just minutes from sunset. Just make sure to bring all of your lenses and don’t forget your tripod, bubble level and remote switch. You may also want to bring a variety of filters and brush up on your setting so you can ensure that you get the best shots. I always utilize my histogram so I don’t miss out on the best shots and avoid taking bad shots that I don’t realize until it’s too late.

[/caption] Overcast skies in downtown Seattle can be turned into a perfect photography opportunity. Whenever I’m visiting Seattle and the skies are overcast I tend to immediately start to brainstorm and think outside the box. Overcast skies over a huge city offers some of the most spectacular opportunities that you can imagine. This is especially true if you’re inside the city with the towering sky scrappers at your fingers touch. You will always want to shoot upwards in order to frame the buildings in front of the cloudy skies. This way you will be aiming your camera at around a 90 degree angle and the personalities of the clouds will be revealed. This photo is a perfect example, with the dynamic colors, formations and angles of the ever changing angry skies. The city just complements the clouds rather than the clouds hindering the city. However, the most challenging thing to remember is to always think outside the box and never underestimate the power of the clouds. If you wait too long, you may miss an amazing streaming cloud formation that can take the shape like the one in this very photo. Photoshop is also your best opportunity to take advantage of the clouds since you can separate each of the clouds from one another and really show the dynamic ability of them. I try not to rely too much on Photoshop but it offers some great advantages whenever needed. However, I always trust my settings on the camera as I’m taking photos as well as reviewing every photo on the histogram. You should never just rely on Photoshop since you can’t fix a bad photo and once you’re sitting on your couch, it’s too late. I actually took this shot on the boardwalk near the Seattle Aquarium. I wanted to include the water so I stood near the end of the pier and tilted the camera at about a 90 degree angle without cropping out too much of the water. Even though it was overcast and 7:15pm at night, the day was still pretty light out since it was during July. I attached my CIR-PL and warming filter in order to filter out the glare. I was using my Sigma 17-70mm lens and set the FL at 17mm in order to get the most panoramic shot as possible. I set the ISO at 100 and the white balance at 0 since the glare from the clouds and water was too much for the lens. The aperture was at F-4 and the shutter speed was 1/64 seconds due to the low light and settings.