[/caption] One of the last remaining sunny days in Portland just before the rains started! However, the snow had already started pounding the Cascade mountains and Mt. Adams is living proof of that. Just a few days earlier, the mountains were suffering through some pretty hard times but the early snow in the mountains brought some needed relief for the mountains as well as my photography. I took this photo last week, which was the last official sunny day in the Pacific Northwest and I decided to visit the SW part of Portland in order to include some of the mountains. However, Mt. Hood was shrouded in clouds and Mt. St. Helen’s had only a dusting of snow near its summit. I was very impressed with the changing of the vegetation and felt pretty lucky to catch this on digital film since I was able to keep nearly a hundred photos from different angles and positions. I decided to post this shot since it includes Mt. Adams as well as a somewhat panoramic view of the city. The clouds were also pretty cool with a mixture of cold weather clouds and contrails from nearby Portland International airport.

[/caption] There is a great viewpoint to witness Mt. St. Helens, Mt. Adams and parts of Mt. Rainier. The viewpoint is just northwest of Mt. St. Helens and about 2 miles from near the Volcanic Monument area. However, during winter I would plan on running in to some snowy and possible icy conditions since the snow pack can get pretty high and the road conditions can be pretty dicey. If you go early enough during winter you may luck out but the snow pack in the mountains won’t be as good. I was fortunate to get this shot of the moon high above the mountains but unfortunately, the snow in the Cascades was late getting to the region. The area offers some great hiking and snow-shoeing all along the Volcanic Monument area. You are also guaranteed to see some herds of elk as well as bald eagle. You will have the opportunity to look right into the mouth of Mt. St. Helens and even the entire blast zone.

[/caption] All of the Cascade mountains still have so much snow that they look as though its the middle of winter after a huge snow storm. Photos like this, that was taken on 4/30/, is why we love the Pacific Northwest and especially the Cascade mountain range. From the summit of Tom McCall point you can see Mt. Hood and Mt. Adams as they loom over the surrounding topography. I took this shot of Mt. Adams at about 4:15pm and the sun was pretty much directly behind me which didn’t allow for and shadows in the photo. It pretty much lacks any character because of this but at least you can see the entire mountain without any dark areas. This isn’t my best photo of Mt. Adams, especially since I wasn’t using a tripod and the focal length was almost maxed out at 229mm. It also didn’t help that the wind was blowing at 40 mph and I had no cover to help block the wind. I was forced to crouch as low as possible and try to keep a steady hand. This is where IS and photoshop helps tremendously. Because the sun was blinding me from behind I made sure to attach my warming and CIR-PL filters. I was using my Canon 55-250mm telephoto lens and set the camera to Normal/Program mode. Luckily the shutter speed came out to 1/200 second and the aperture was at F-5.6. This allowed me to keep the ISO at 100 and even adjust the white balance to +0.3. Mt. Hood was more difficult to photograph since it was due south and it was directly below the sun. Early morning and late evening would be the best time to visit the summit in order to get the best photos. Your photo opportunities at the summit offer some of the most epic opportunities. These include: Two snow capped mountains, wildflowers, The gorge, cliffs, wildlife, rolling topography, farm land, the historic and winding Columbia river highway and small ponds.

[/caption] The Tom McCall Nature Preserve is well worth the 85 mile drive from Portland. I’ve driven through the gorge many times but I had never stopped to visit this part of Oregon. I normally just gaze out my window and stare at the amazing cliff’s high above or along the Columbia river so I was hoping to finally spend a day exploring some of the basalt cliffs. It’s hard to describe just how magnificent this place really is. I had to choose between 10 photos before settling on this one but it hardly shows just how many photographic opportunities exist. You can see Mt. Adams along the entire trail that winds up to 1722′ Tom McCall point as well as view Mt. Hood once you’ve reached the summit. You can see more of Mt. Adams as you wind up the 1.6 mile trail towards the top Tom McCall summit. The views are stunningly beautiful and you better plan on bringing several memory cards because you will need them. You can also plan on experiencing some very high winds almost anytime of the year. You will notice that many of the trees are growing in the east direction with many of their branches leaning towards the east. Since parts of the trail hug near the steep cliffs it’s best to pay attention while hiking along parts of the trail since a strong wind gust could easily catch you off guard and blow you right off the cliff. Even the winding road that takes you to the Rowena Crest Viewpoint is worth stopping to take several pictures. The road that takes you here is part of the Old Columbia River Highway and it was probably one of the toughest parts of the highway to build. I took this photo at about 5:00pm and because the wind was so strong I wasn’t able to use a tripod all day. The wind was just too strong and each time my photos would turn out too blurry. Having a good steady hand and utilizing the sharp program in Photoshop helped. I was using my Canon EOS T1i along with my Sigma 17-70mm lens. I attached my warming filter and CIR-PL filter to ensure that the sky was well saturated and the foreground and landscape showed off their brilliant colors. Without these two filters, your entire day would have been ruined and none of your photos would probably be useable due to the harshness of the blinding hard sun. I set the focal length at 17mm in order to create as much of the landscape as possible as well as create a large field of view. I had the camera in Program/Normal mode so the aperture was at F-6 and the shutter speed at 1/125 second. I wanted to limit the amount of light to enter the cameras sensor so I set the ISO to 100 and then reduced the white balance to -1. As you can see in this photo the sun was at about 90 degrees in the far left corner of the photo and I was facing southwest.

[/caption] One a sunny day you are able to see as far north as Mt. Rainier and as far south as The Three Sisters. There is a secret vantage point where you can get one of the most spectacular views of the Washington and Oregon Cascade mountains. You can read about this place on my article that I wrote on 6/14/10. Late Spring is my favorite times to hike along the foothills of the Cascades since the mountains still have an abundant of snow as well as in parts of the lower elevations. The creeks, alpine lakes and smaller rivers are also swelled to the brim with runoff. You can also still witness many of the spring wildflowers basking in the warm sun. The air is also more pure and less polluted. The views seem to be never ending during the months of May and June. I took this shot on 6/12/10 and I was using my Canon EOS T1i along with my Canon 18-55mm kit lens. I attached my warming filter as well as my CIR-PL. I also used my tripod, bubble level and remote switch in order to avoid any camera shake since it was a bit windy and my footing was a bit sketchy. The sun was a bit low since it was about 5:30pm and the sun was directly behind me. You can clearly see Mt. St. Helens, Mt. Rainier and Mt. Adams in the distance. The field of view is large as well as the depth of field which makes this shot especially appealing since there isn’t any blur in the foreground or background. I set the focal length to 35mm in order to include each of the mountains without reducing the focal length anymore than I needed to. I would have tilted the camera lower in order to include less of the sky but the forest trees were so low that it would have caused the depth of view to be too soft. The camera mode was in Program/Normal so the aperture was set at F-6.3 and the exposure speed at 1/80 second. I set the ISO to 100 and the white balance at -1 in order to keep the shot as sharp as possible. 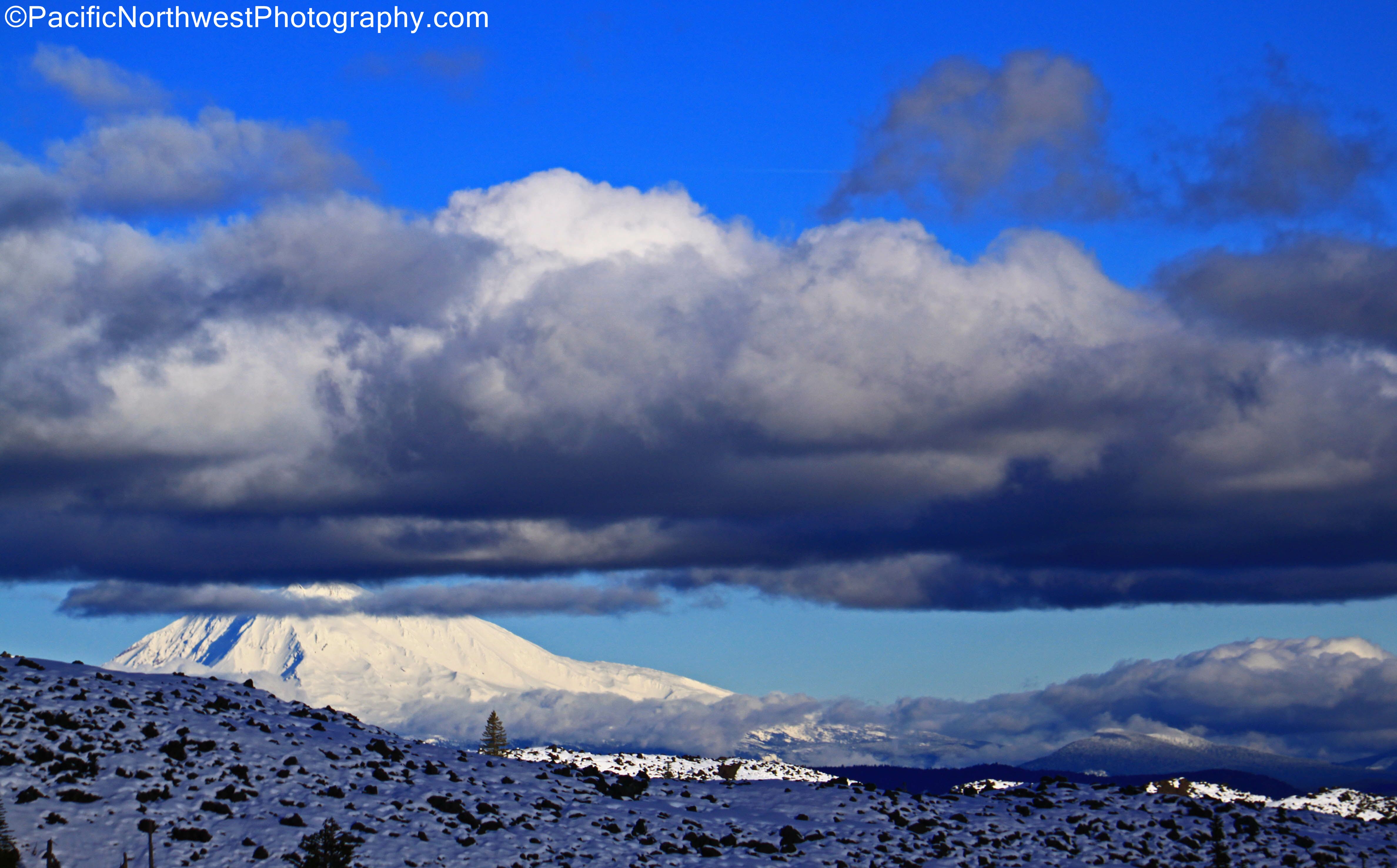