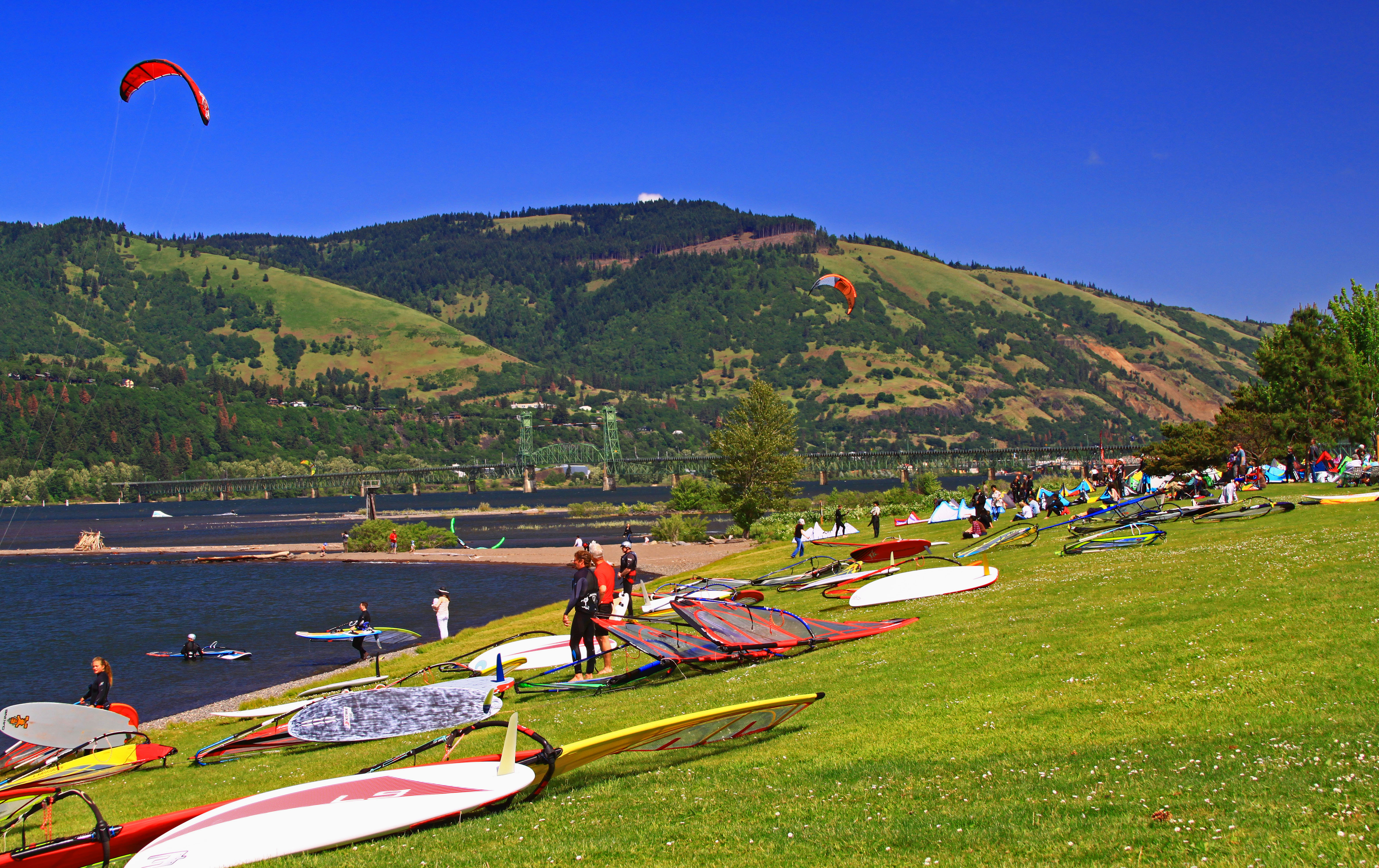 Hood River, Oregon has some of the best wind for kite surfing and windsurfing! With warm and dry wind tunneling through the Columbia river gorge, you can pretty much expect some great conditions. Hood River, Oregon pretty much has the best of both worlds. It isn’t as dry and hot as The Dalles, which is just a few miles in the east but enjoys much better sun drenched days than Portland in the west. It literally sits right at the cusp of the cool west and the dry east. Mt. Hood is just to the south of the city and Mt. Adams is just to the north. Hood River was rated as one of the best river city’s in America and one of the most outdoor oriented cities. There are several rivers that flow near the city as well as epic mt. biking and hiking trails. You are only a few miles from some of the best waterfalls in the state and only a short drive from year round skiing. Agriculture and vineyards make up the biggest part of their economy but manufacturing of kite surfing and windsurfing gear are also a dynamic part of the economy. There are also several breweries that make up the economy. The population might be small but most of the homes are owned by families that live as far away as the east coast. There aren’t a lot of places that have what Hood River has during the summer months and a quick trip will show you why. Nothing better than spending the day catching some of the best kite surfing conditions on the planet and then relaxing at a brewery taking in the views of the gorge. There are also a lot of points of interests just a short drive from Hood River. If you’re planning a trip, I would plan on spending at least a week during the summer time and plan on getting a pretty good work out. Don’t forget your kayak, bike, hiking gear, skis/snowboard, windsurfing/kite board and rock climbing gear. It’s pretty much required that you love the outdoors and really want to get a work out but if not, there are dozens of wineries and fruit stands that you can gorge on. If your into bird watching, you may also want to bring a good pair of binoculars or a telephoto lens since you are sure to see dozens of osprey, hawks, eagle, falcons and turkey vultures. The agriculture and vineyards attract every rapture you can imagine and you’re guaranteed to see them soaring above the Columbia river as well. I’v spotted several osprey catching fish in the river and then see an eagle steal it right out of their talons or coercing them to drop it from the sky. There are also several rapture nests lining along the river in the gorge.

[/caption] This late afternoon shot was taken from the Hood River city park, which is located on the western most part of the city. You can set up your tripod and aim it directly west, which as you can see offers a great view of the river, the cliffs and plenty of vegetation. The best time to visit the park is later in the afternoon and during sunset. The park is very small but the views are pretty amazing and there is enough room to set up for a picnic or just take in the view.