[/caption] No, this isn’t Hawaii, the South Pacific or the Caribbean! This is actually Cannon Beach, Oregon! There is one sure way to get great shots like this that begin to take on the likes of some tropical island area! Usually the summer months offer the perfect sun soaked days that allow you to trick people into thinking that the photo was taken somewhere else. Most of the vegetation along the rocky cliffs are almost identical to tropical vegetation and all you need to do is find the best shot that looks semi tropical. I actually took this shot at the southern most end of Cannon Beach. There is a trail that takes you high above the beach and is located between Cannon Beach and Ecola Beach! The views are amazing and the bird watching is awesome. There is a private beach directly below that can only be reached when the tide is low and if you look closely you may see several seals swimming about near the rocks below.

[/caption] As I patiently wait for the snow to continue to fall in the Oregon Cascades I began to ponder my experience while visiting San Juan Island last summer. I remembered that I had taken a photo that I really liked and forgot to post on my blog. However, I did add it to my website since it is one of my more favorite photos taken just after sunset. The bay was so still that I was able to make it look as though it was made of colored glass and the sky was so amazing that it also looks like an exact replica of the water. All of the colors on this night were absolutely amazing. To get this shot I was using my Canon Rebel T1I and my Canon 18-55mm lens. In order to set the shutter speed to 25 seconds I kept my CIR-PL, warming and UV filter attached since the glare was still pretty intense and I wouldn’t have been able to get the smooth warming effect of the water or sky. I had to take several photos since I was having problems with water spots appearing in the photo. I knew that I needed to have my sensor cleaned but this was the first time it was so evident. A lot of it had to due with the colors in the photo. As you can see, the colors in this photo are pretty dramatic and pretty unusual. You can see Vancouver Island in the distance. I had the camera in Program mode so the F stop was at F-11. I set the ISO to 100 and the white balance at -0.7. Since I took this photo at 8:55 pm, which was just as the sun set over the Island, the colors were really exploding over the water and the sky. I had to take several photos while adjusting my settings but I was pretty satisfied with most of the photos. But again, I was very disappointed with how dirty my sensor was. I took this shot at San Juan County Park, on the northwest side of the island. As I stated in my previous article, I would highly recommend visiting this tiny island since it offers everything that a photographer and outdoor adventurer could ever ask for. 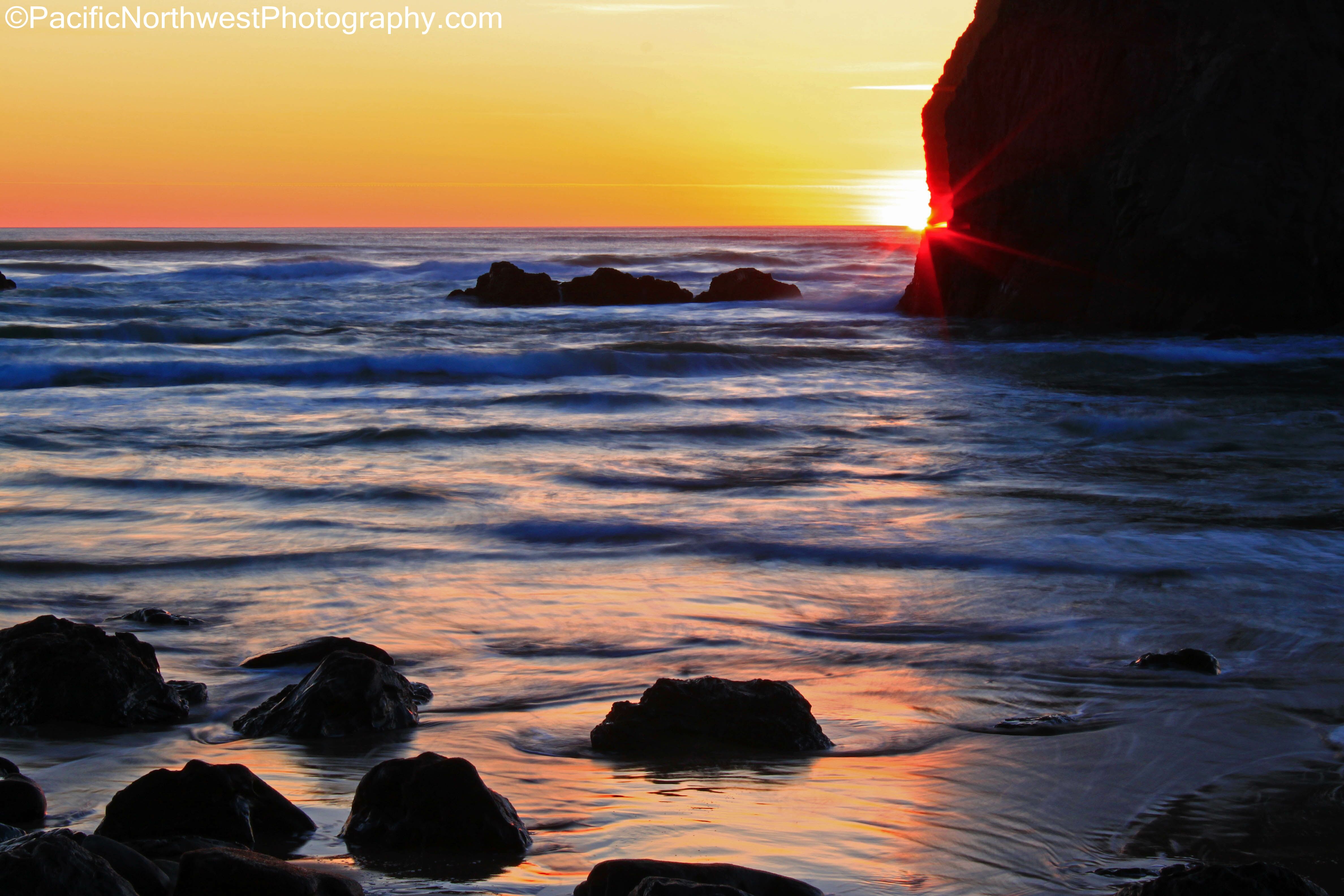 [/caption] No I didn’t take this photo last summer. I took this last Saturday during one of our warm and sunny days along the Coast. What’s most interesting is that there was absolutely no wind for the entire day. There wasn’t even any wind at the summit of Neahkahnie Mountain. The crowds were also fairly spars as well. This made for one of the best days along the coast in a long time. The sun set fairly quickly so I had to really scramble to get some descent shots. I didn’t need to use any of my ND filters, which made it easier for me to change lenses when needed.