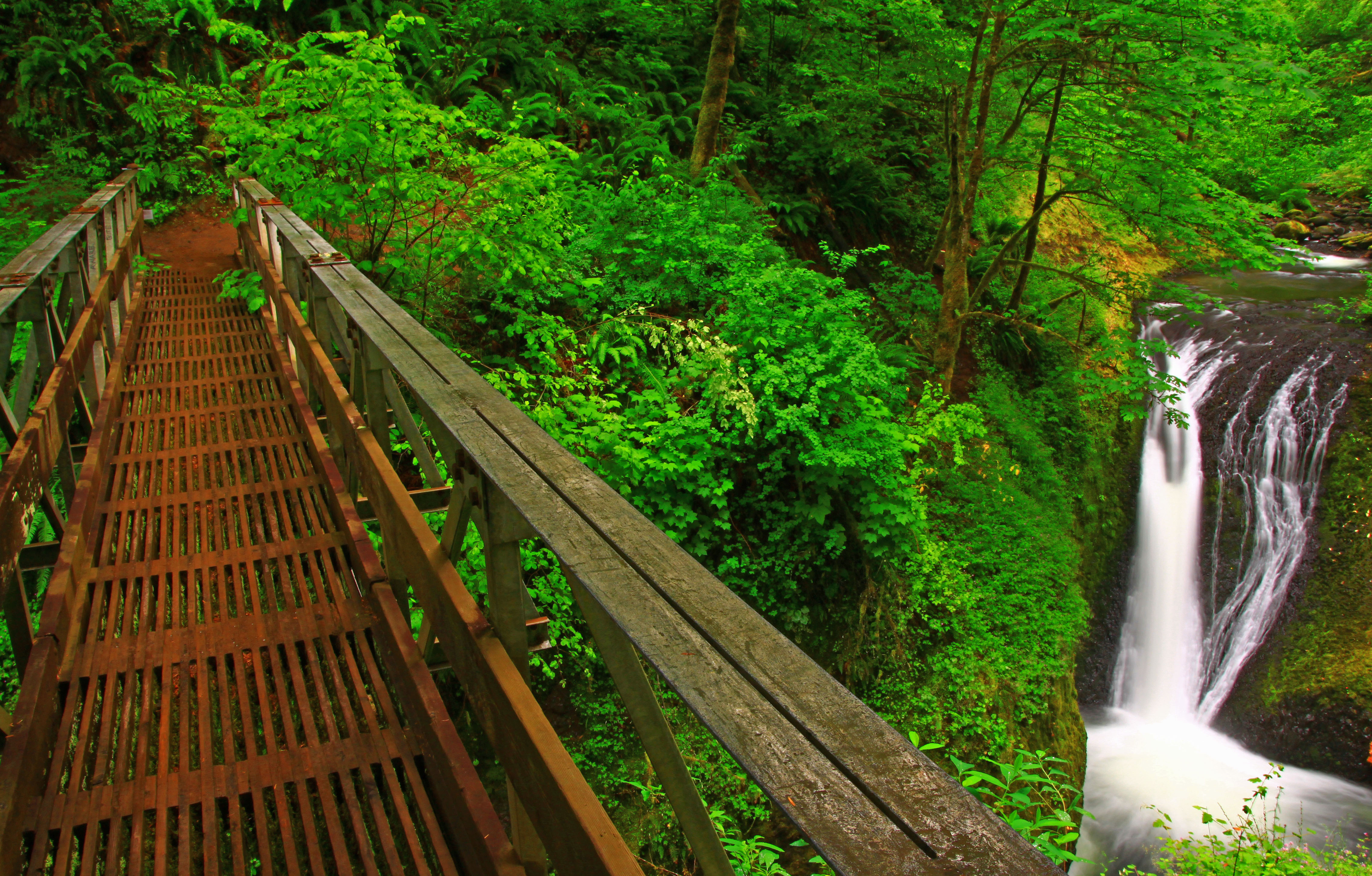 Beautiful photo of Oneonta Falls and bridge in the Columbia River Gorge, Oregon. This particular trail will take you to four spectacular waterfalls and provide you some of the most awesome views of the Columbia River as well as views of the thick forest and lava cut gorge. One of the best hiking destinations is above Triple Falls and if you continue past the falls, you can expect to hike alongside the creek that feeds the waterfalls. There are thousands of photo opportunities and if you’re up to a really long and strenuous hike, you can continue for another 7.7 mile to reach Multnomah Falls. On this particular hike, to Triple Falls, I was sadly turned away due to the fact that there was a mud slide that took out a portion of the trail just a few hundred feet from the waterfall. The forest service was working on the trail but it was a mud soaked mess and I wasn’t interested in slogging through three feet of mud. The trail was still open and passable but it was pretty muddy and you can expect to endure a very muddy mess for at least another month before it dries out. I decided to turn back and head towards Oneonta Falls to see if I could get some descent shots. The switchback that continues past the bridge was also damaged, so you can expect to get pretty muddy as well. However, if you park on the other side of Horsetail Falls parking lot, you can come in from the west and avoid the muddy part of the trail. Because the snow in the mountains are melting and with all of the rain that we have received lately, you can expect the waterfalls to be at their peak. The water is thundering through the gorge and you will find yourself immersed in fresh water chaos. The vegetation is at it’s peak and the rivers, streams and creeks are swollen to their brim. Now is the absolute best time to visit the gorge, if you want to see the gorge at its best as well as having the best opportunities to get some great shots. To get this shot, I made sure to use my tripod, bubble level and remote switch. I was using my Sigma 17-70mm lens and attached my CIR-PL and warming filter. I set the camera mode to shutter priority and set it at 2.5 seconds in order to get the flowing motion of the waterfall. The water was moving so fast that I never set the shutter priority past four seconds all day. The waterfalls were literally moving at light speed and anything over four seconds washed out the water. I set the ISO at 100, white balance at -1.3 and the aperture was at F-4. The skies were completely overcast and it was sprinkling all day. However, since the water was moving so fast, it caused the pictures to become too bright, so I had to reduce the white balance to offset the highlights. If you have a descent telephoto lens you can get some great opportunities to get some shots of the raptors flying around the gorge. While hiking near the main trail I saw two juvenile bald eagles jump from their perch and start hovering just above where I was standing. I also saw several bald eagles and osprey flying near the Columbia River gorge. The gorge is a raptor gold mine due to all of the fish in the river. If you have the patience, you can expect to get some great photos of them.