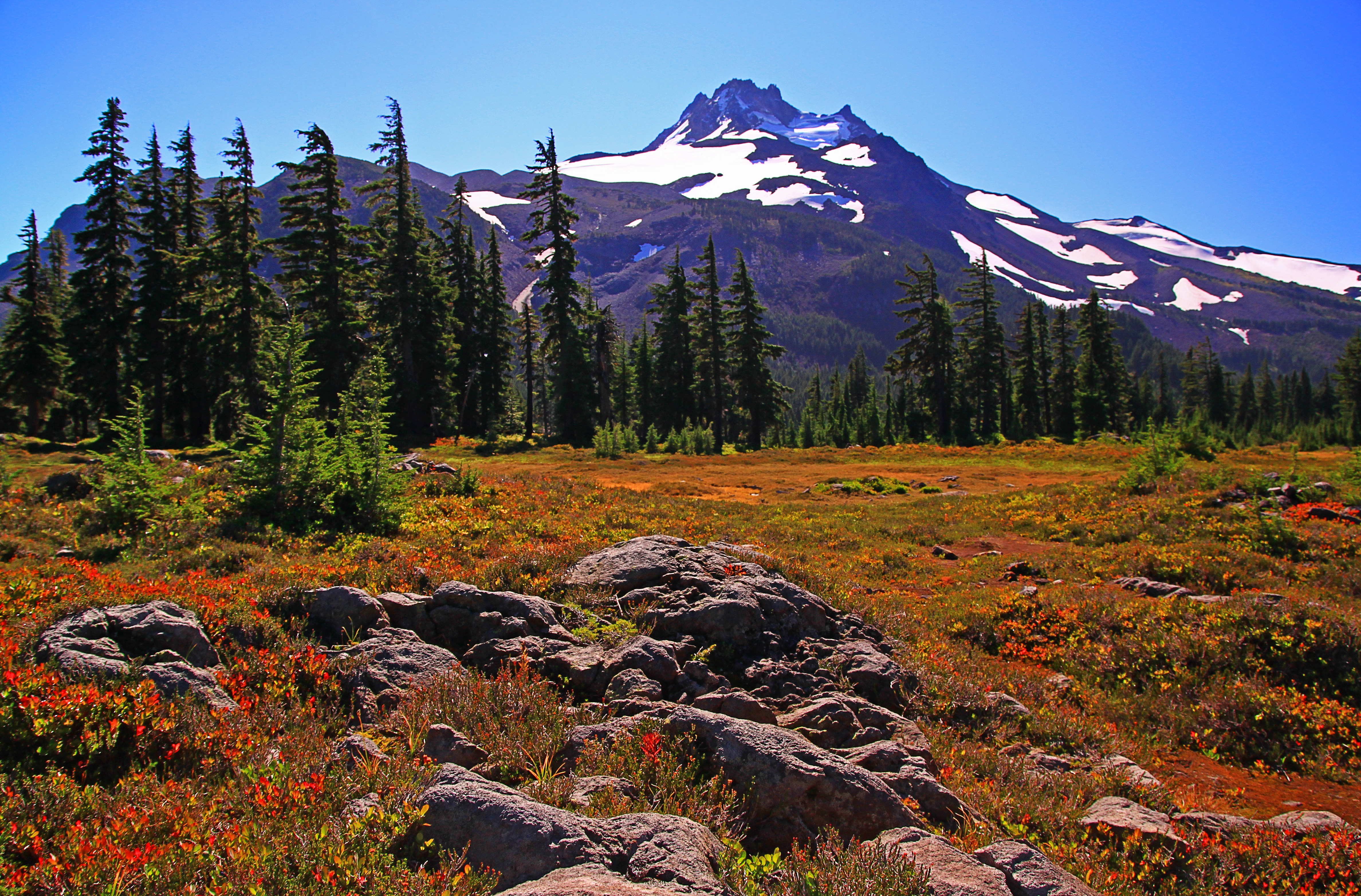 A beautiful picture of Mt. Jefferson at Jefferson Park, Oregon. This photo was taken on October 3rd and you can see all of the Salmon berries in the foreground. They are in abundance throughout the entire Jefferson Park area and if you’re lucky you might stumble on a black bear foraging. I never got a chance to see one but I did notice several bear tracks and scat throughout the park and I did hear some rustling in some brush but I never took the time to find out what it was. September and early October is the best time to visit the park if you want to take advantage of getting the opportunity to see some wildlife like bear, elk or deer. However, the days are much shorter and the snow covered peak of Mt. Jefferson is at it’s lowest point of the year. You will have the opportunity to forage around the salmon berry drenched canvas as well as still have the opportunity to swim in one of the many lakes in the park. The weather can actually be warmer and sunnier during the months of September and October as well as maybe even getting a little of dusting of snow in the early mornings. The crowds are also much smaller then the summer months and this can be critical if you’re planning on back packing or hiking on the weekend. However, the summer months offer longer days and more snow at the higher elevations. Summer also brings out the ever so brilliant alpine flowers that canvas the park. You can literally feel like you could get lost in all of the wildflowers throughout the park. Even the lakes and smaller ponds will be at their highest levels and you can also follow some of the small creeks travelling through the lakes and fusing them into one giant water system. The biggest drawbacks about visiting during the summer months is that if you are planning on visiting during the weekend, you can expect to see hundreds of other hikers and back packers. This can really ruin the alpine experience. However, if you visit during the mid week, you are less likely to see as many people. Another drawback is that sometimes the trail will be covered in snow until August and that can really cause a problem unless you come prepared. The last time I visited was in early July and I couldn’t hike past the 1/2 mile mark without having to put on my snow shoe gear and I eventually ended up just finding a ledge and taking photos from there. I basically ended up losing out on a great hiking trip but at least I brought some snow shoe gear to get me about 3 miles up the trail. You also really want to check the weather and even contact to ranger station to see if the forest road is open. Sometimes it doesn’t open until later in the summer or there may have been a washout or fallen trees blocking the road. This can really ruin your day if you make the 100 plus mile drive and then only find out that the road is closed. You will need to purchase a Northwest Forest pass in order to park at the trail head and I would also recommend that you store your dinner in your car for your return since you will be pretty hungry, thirsty and very tired and dirty once you get back to your car. The hike to the park is 5.1 miles one way and it’s very steep. The elevation gain is 2400 feet and that’s only to the park. There is another 1000 feet of elevation gain available if you decide to continue past the park. That also doesn’t include the 3 or 4 miles of trails that winds it’s way around the area. If you plan on doing a day hike I would plan on hiking over 15 miles round trip since you won’t want to just hike to the park and then sit around. There is way too much to do and see once you get to the park. In fact, the real views and fun doesn’t even start until you get to the entrance of Jefferson Park and believe me you will know when you get there. About a few years ago, I was taking some photos of Mt. Jefferson when all of a sudden a snow owl leaped from a tree branch and quickly flew away. I never had a chance to even take my camera off the tripod to get a shot. There are even some waterfalls that you can take photos of as well as several snow bridges along the higher elevations that you may be able to cross.

One thought on “Mt. Jefferson, Oregon”