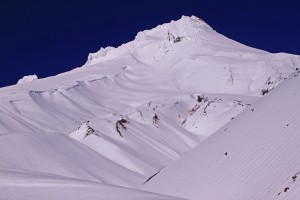 Last week was another awesome day up on Mt. Hood, Oregon. I visited the same place that I was last week and what a difference a week makes. The previous week was a complete whiteout with nothing but snow blind conditions but last week it was nothing but blue skies and spring like conditions. We were also blessed with a good two feet of powder, which made the snow shoeing more than memorable. However, the temperatures got pretty high and I ended up finding myself in some pretty soupy conditions later in the afternoon. At first I was a little hesitant about heading towards the lower end of the White River Glacier but as I continued along I realized that it look pretty safe. The temperatures were a little cooler and the wind was pretty gusty. You can see some of the wind swept snow in this photo. Too bad a lot of the snow was blown off parts of the higher elevations but at least it provided some character. The snow did eventually start to get pretty soft but by this time I was almost at the stopping point. If you haven’t been to the White River snow park or made the trek to the top of the trail, I highly recommend that you visit. You will want to expect the unexpected since there is no place to escape the changing conditions and if you do find yourself in a whiteout or snow blind conditions, you can expect a very dangerous and stressful trip down since each side is a steep 500 foot drop off and you would surely be trapped or stuck in the creeks below. There are a couple trees about 300 yards from the top but they wouldn’t provide a lot of protection. However, they could provide a good point of reference while making your way down. You would probable just want to hunker down and wait for the weather to change if you did find yourself in dangerous conditions since I couldn’t imagine anyone surviving a fall from either side and I surely wouldn’t want to be the first. The good thing about the trek is that you can see quite a bit and you would probably be able to see any change of conditions but unfortunately you are pretty close to the mountain and aren’t able to see much on the west or north and this is where most of the nasty weather comes from. I have actually run down with my snow shoes and I think that you could get down safely if you were trying to beat out a fast moving storm. I would also recommend that you bring your best camera and lens while visiting this spot. I took this photo with my Canon Rebel T1I and my Canon 23-135mm lens. I’ve packed my tripod with me before but it can get really cumbersome and heavy so I started leaving it behind. It’s also not worth setting it up most times since I usually end up taking between 500-1000 shots at a time and I no longer have the patience with a tripod when snow shoeing.