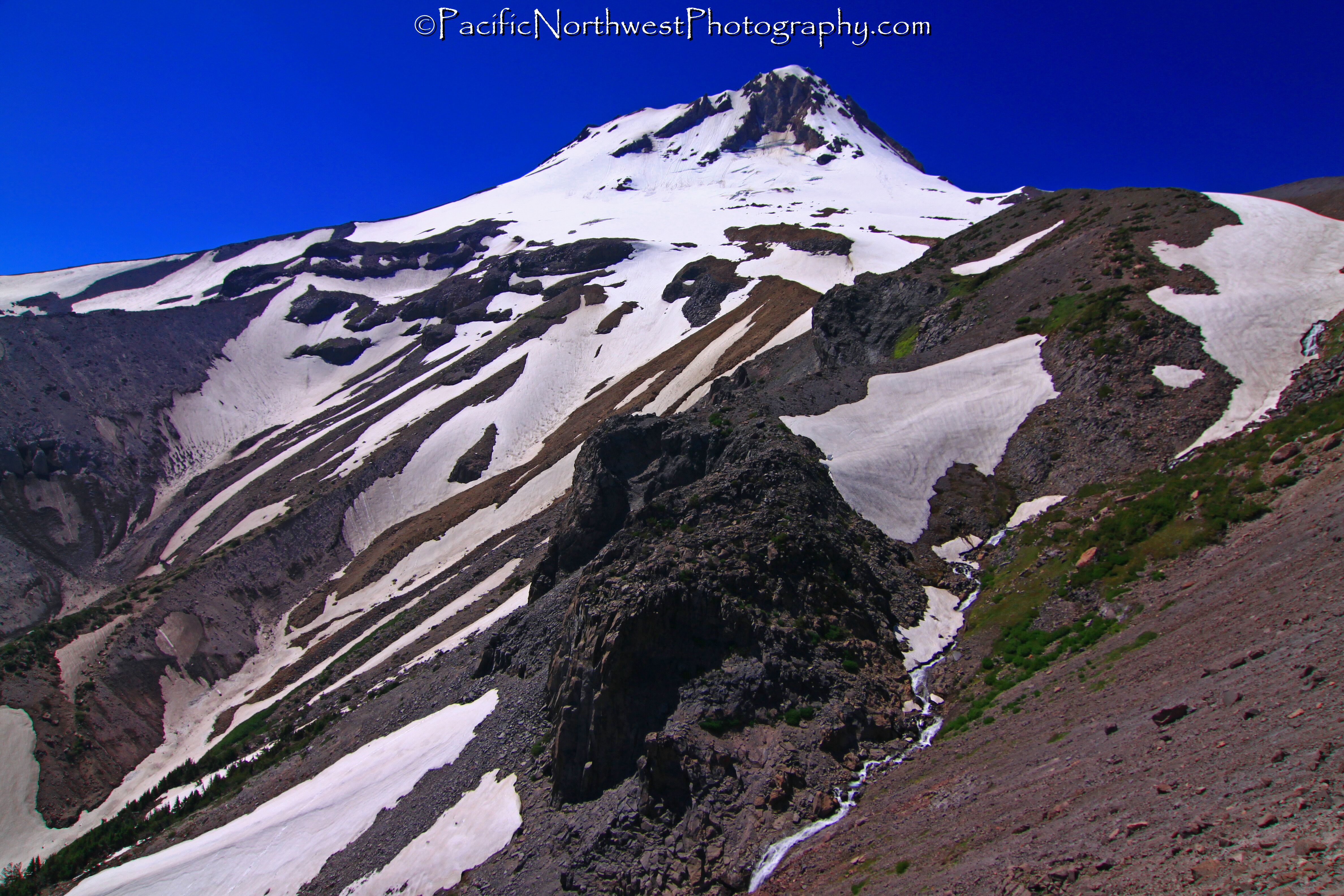 [/caption] One of my more grueling hikes that I’ve done so far this summer. In fact, this was one of my most difficult and longest hikes I’ve ever done. I’ve done this hike before but I stopped near Lamerson Butte which is at 6500′ and there wasn’t any snow covering the trail. This time I hiked to about 8500′ and had to use my poles since the last 3500′ were covered in snow with only some bare spots along the trail. Even the main trail disappeared at about 5500′. This made it more difficult when I was coming down since I had to find the trail through the spotty snow trails made from myself and some other hikers. The last 1500′ feet was especially tiresome since I had to go off the trail and blaze up the snow banks. However, I always enjoy hiking in the snow during the month of July. Especially when its 80 degrees at the start of the trail. There wasn’t a cloud in the sky and the sun was pretty relentless. I could see several pockets of water growing from the many snow banks around the mountain. At least the snow was solid enough to make my hike much easier. The hike is pretty much straight up and then straight down, when returning to the bottom of the trail. I probably hiked between 12.5 and 13 miles total and ended with about 3500′ elevation gain. To make this hike, its best to start near the Mt. Hood nordic center parking area. The trail starts just before you get to the nordic center and there is a parking area right at the head of the trail. It’s best to follow the Elk Meadow trail and then veer left at a trail junction towards the Gnarl Ridge trail. You can actually hike all the way to Cloud Cap and Cooper Spur but that would make for a really long day hike. You hike across several creeks, which makes for some really good stations to cool down. There is plenty of shade for most of the hike and you have some spectacular views of Mt. Adams and Mt. Rainier to the north as well as Mt. Jefferson and parts of the Three Sisters to the south. I was standing just up from Lamberson Butte when I took this shot. You can see where Newton Creek is born in this photo. You can also witness many of the boulders rumbling down Gnarl Ridge and then crashing down to the bottom. Usually it starts with an echoing sound and then you just have to look for the dust high in the distance. The best part is watching the boulders cascade at high speeds and then crashing to a halt. There are several wildflowers at the high elevations. Once you get above the tree line, the vegetation takes on a whole knew personality. Lichen grows on the rocks and all kinds of crazy but colorful plants and flowers grow in the volcanic soil. To get this shot I had to be especially wary of the glare since there were no clouds and the sun was high in the sky which caused a lot of sun glare. I was using my 12-24mm wide-angle lens in order to capture as much of the panoramic scene as possible. The focal length was at 15mm and the F stop was at 8. I set the ISO at 100 and the exposure compensation/white balance was at -1. the shutter speed was at 1/125 second. I had my CIR-PL, warming filter and UV filter attached. Since the field of view was so vast and there were no shadows, I knew that I wouldn’t be needing my tripod. Which is a good thing since I didn’t bring it with me. This hike is a must if you really want to test your stamina and leg strength. It’s a very grueling hike but you could go even further if you have the ability. Sometimes having to carry all of my camera equipment along with my supplies makes these types of hikes especially difficult. However, I will do it again next summer for sure.