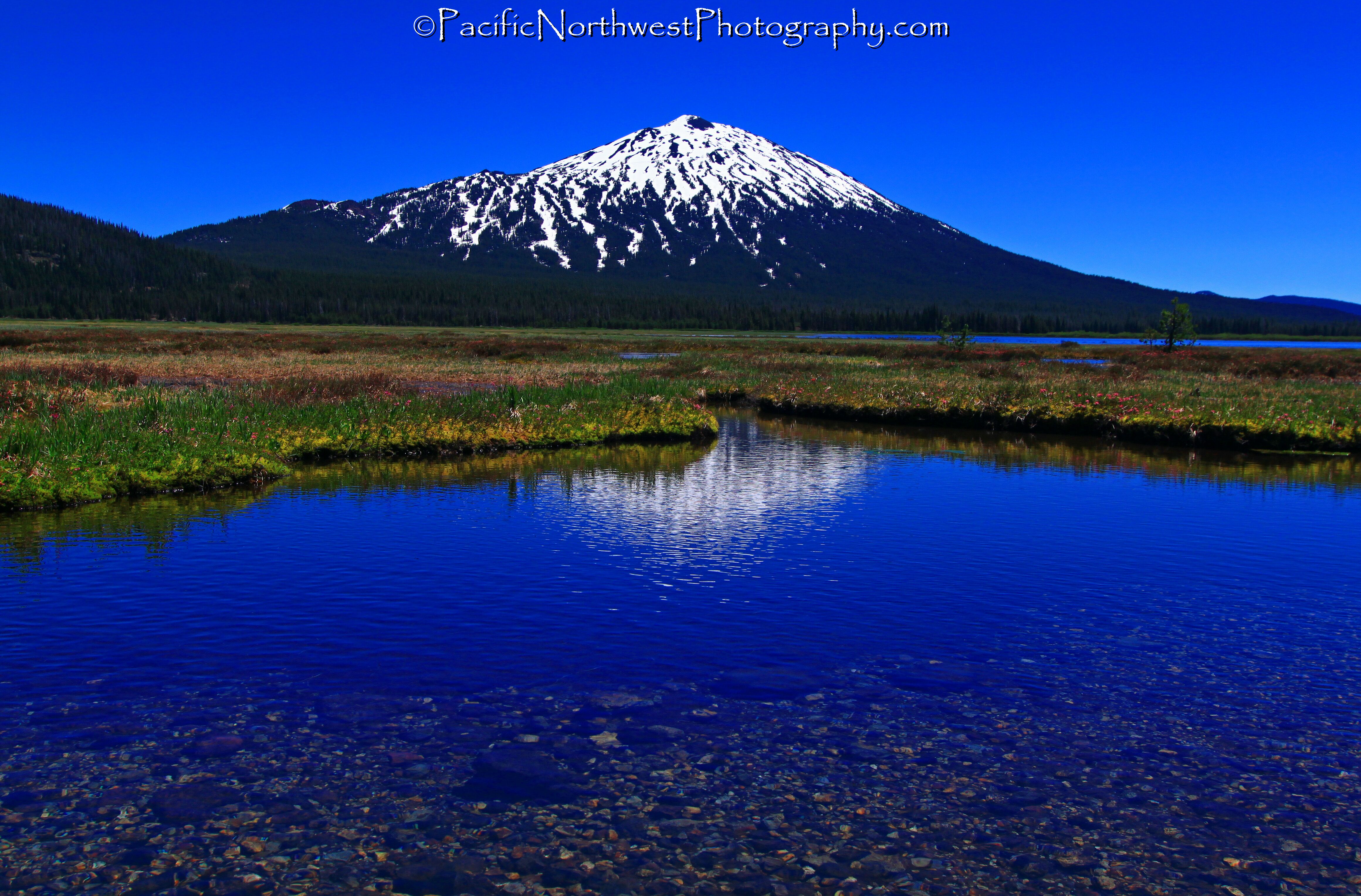 [/caption] Mt. Bachelor is a perfect lava dome mountain rising 9,060 ft in the Central Oregon Cascades. Its isolation from the the Three Sisters and Broken Top make it somewhat of a mystery to me. You would expect to see this much snow on the mountain in late May or early June. However, I took this photo of its western side in late June. Earlier in the morning I had climbed to the Pine Martin Express from the bottom of the chair lift and was met with more snow that I had anticipated. I wasn’t prepared for the amount of snow so I had to climb with nothing more than shorts and my hiking shoes. It made for a great workout but my legs got pretty sunburned due to the glare of the snow and sunny skies. As I sat at one of the lava fields just below the top of the chairlift, I thought about trying to summit but the snow was getting pretty soft and I wasn’t anywhere prepared for a summit trip. I got this shot while driving west on the Cascades Lakes Highway. There are several creeks that feed in to Sparks lake and I decided to hike along the creek and small meadows in order to get the perfect shot with the glare of the creek reflecting parts of Mt. Bachelor. The creek was so still at this point that I was able to take the shot without hardly any movement of the water. Goose creek is fed by one of South Sister’s glaciers and the water was ice cold. There were several wildflowers along its banks and all along the meadows surrounding Sparks Lake. Too get this shot I didn’t use my tripod since the sun was near its highest point and there were no shadows. I was using my ultra wide-angle lens and had the focal length at its maximum depth at 24mm. I was using my uv filter, warming filter and CIR-PL in order to keep the glare of the sun from washing out the color of the sky as well as the contour of the rocks in the creek. The warming filter helped bring out the rocks and and CIR-PL helped me capture the blueness of the sky without distorting the mountain. I had the white balance at -1 and the ISO at 100. I had the setting at auto so the shutter speed was 1/160 of a second. The F stop was at F8. Since the sun was directly above me I had to make sure and under expose as much as possible without losing the personality of the scene. Without my filters and the low settings, the picture would always come out over exposed. I was amazed with how much snow there was in the Central Cascades, even though it was near the 80 degree mark. Along my journey I met some skiers hiking down from the South Sister. I wasn’t surprised since all of the trails were covered within only yards from the start of each trail mark. I can only hope that this means the Cascades will have plenty of snow well into August.