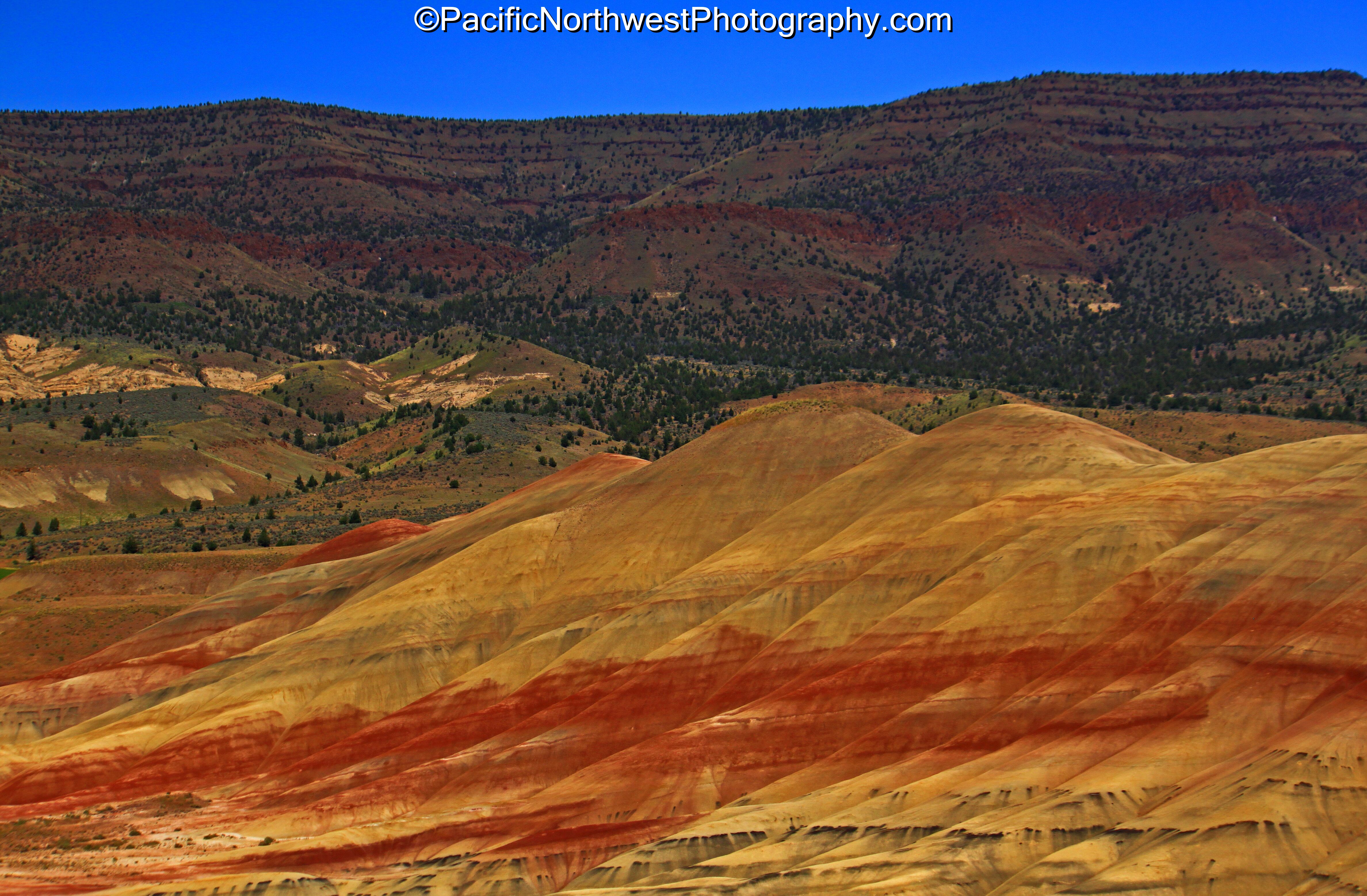 [/caption] I spent only one day visiting the John Day Fossil Beds and even though there are 3 different units throughout the area I only had enough time to visit one of them. The Painted Hills are the closest from Central Oregon and the easiest to get to. I also figured that the Painted Hills were the most interesting to photograph and I wasn’t disappointed. If you haven’t ever been here, I highly recommend it. Even if you aren’t a photographer, this is a spectacular place to visit. There is a hike that takes you about 3/4 of a mile above the Painted Hills and provides a 360 degree panoramic view of the entire area. You would never imagine that you’re in Oregon when visiting this place. It looks more like a colorful image of what the moon might look like. The colorful striped Painted Hills began as ash that erupted from the ancestral Cascades 33 million years ago and eventually settled in a massive lake here. The red color is from iron and the black from manganese and the yellow claystone was colored by trace minerals. Since you aren’t allowed to hike among the Hills, you can see several trails cut by the wildlife that lives in the area. I spent most of the day trying to figure the best position and area to photograph the Hills. In this photo, I made sure to get spectacular Sutton mountain in the background as well as the blue sky hovering above this ancient land. I’m not sure of the elevation of Sutton mountain but I’m pretty sure it’s at about 5,500 feet. I took over 1500 pictures and I’m still going through them but I thought this best shows the color of the Hills as well as the mountains that dominate the Painted Hills Unit. I never used my tripod since the sun was pretty bright and most of my shots were panoramic shot. I also didn’t have the patience to set up my tripod since I was constantly moving. I was like a kid in a candy store on this trip. I was using my uv filter as well as my warming filter and my CIR-PL. I had my 18-55mm lends on my Canon and had the focal length at 55mm. I had the ISO at 100 and I had to have the white noise menu at -1 due to the brightness of the sun. I had the auto setting on and the shutter speed was taken at 1/200 second. I was near the top of the upper part of the plateau when I took this shot and there was no shade to block out the sun. I pretty much had to just mess around with my camera when trying to get the best shots possible. If I had the time, I would have spent an entire week visiting the entire John Day Fossil Beds as well as many of the old ghost towns in the area.